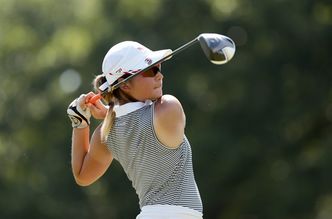 The Associated Press
TULSA, Okla.: Canada’s Naomi Ko won two matches Thursday in the U.S. Girls’ Junior to advance to the quarterfinals at Tulsa Country Club.
The 17-year-old Ko, from Victoria, British Columbia, beat stroke-play medallist Megan Khang of Rockland, Massachusetts, 1 up in the round of 32, and topped Alyaa Abdulghany of Newport Beach, California, 2 and 1 in the afternoon round of 16.
“It was a big confidence-booster,” Ko said about the victory over Khang. “Someone actually asked me if I felt like an underdog going into the match, and I kind of did, but I knew I had a chance because anything can happen in match play.”
The 17-year-old Khang was making her record-tying seventh appearance in the tournament.
“Naomi was awesome, especially on the putting surface,” Khang said. “She made every birdie putt whenever she was on the green inside 20 feet. She’s a good player and she’s played well this week.”
The North Carolina State-bound Ko will face South Korea’s Eun Jeong Seong on Friday morning. Seong routed Thailand’s Chakansim Khamborn 6 and 5 in the round of 16.
In the other upper-bracket quarterfinal, Jayna Choi of Collierville, Tennessee, will play Annika Cedo of the Philippines. Choi advanced with a 2-up victory over Karah Sanford of Escondido, California, and Cedo beat Gina Kim of Chapel Hill, North Carolina, 4 and 3.
Long-hitting Angel Yin of Arcadia, California, powered into the quarterfinals. She beat Mexico’s Maria Balcazar 4 and 3 in the morning, and eliminated South Korea’s Yujeong Son 5 and 3 in the afternoon.
Yin will play Andrea Lee of Hermosa Beach, California, a 7-and-6 winner over Marni Murez of Manhattan Beach, California.
In the other quarterfinal, Mexico’s Evelyn Arguelles will face Mika Liu of Los Angeles. Arguelles beat Kathleen Scavo of Benicia, California, 1 up, and Liu topped Aneka Seumanutafa of Frederick, Maryland, 2 and 1.