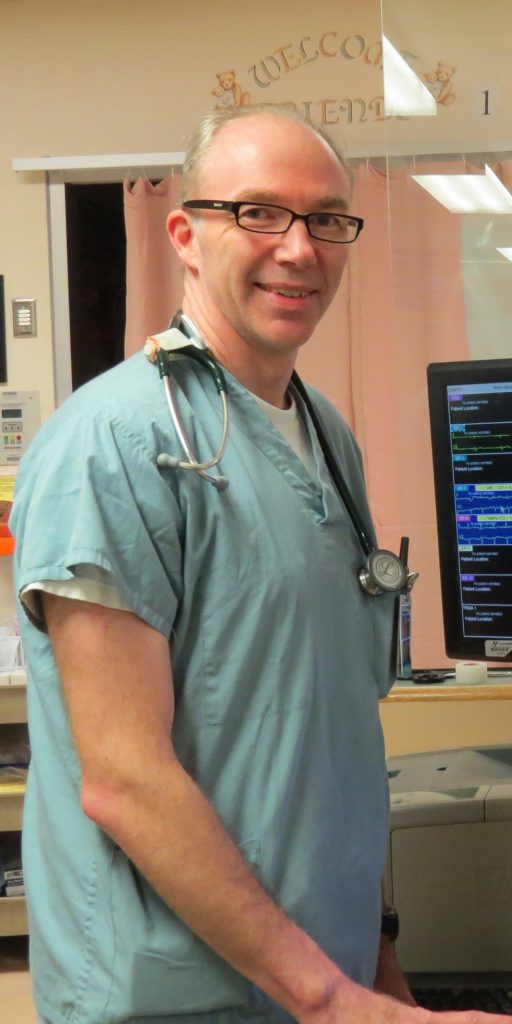 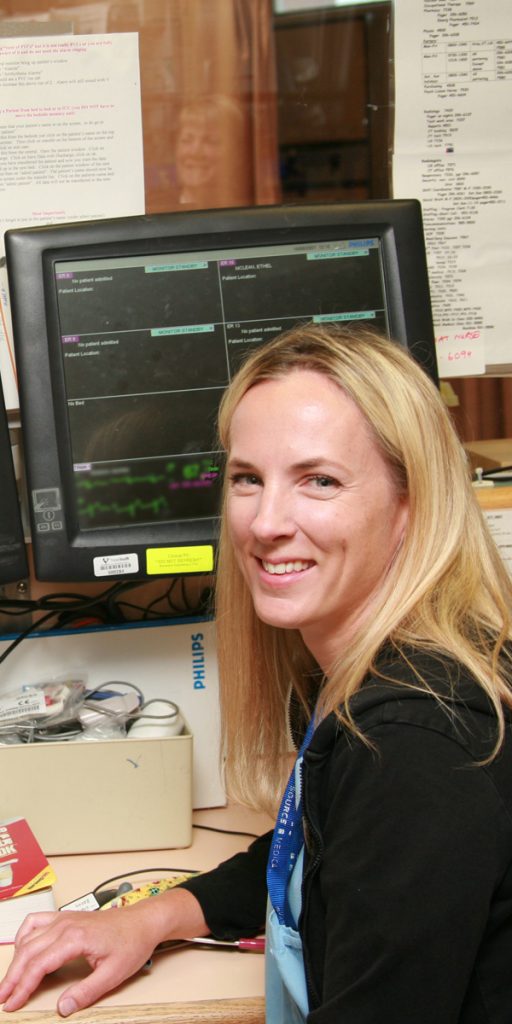 An Emergency Nurse and Doctor on the ER Expansion

Dr. Jarrod Hendry grew up in Vancouver, graduated UBC Medical School and did his residency at McGill in Montreal, specializing in Emergency Medicine. Always his intention to return to the west coast, he came to Peace Arch Hospital in 2004. He served as the Head of the ER Department from 2009 to 2015.

Hudson: Dr. Hendry, describe the ER when you came here in 2004.
Hendry: The ER consisted of about 14 beds. The emerg physicians were mainly family doctors with only a couple of us that were specially emerg trained. There was of a lot of geriatrics, not a whole lot of high acuity stuff. We had the CT Scanner, but not the MRI. We were seeing 22 to 23 thousand patients per year, around seventy patients per 24 hour day. It was a good volume, but we weren’t run off our feet.
With people moving here due of the cost of housing in Vancouver, the lifestyle, and the schools, we started to see more acute cases, car accidents, more acute heart issues, coronary syndromes, strokes and so on, instead of them being diverted over to Royal Columbian. When I was the head of the ER from 2009 until 2015, demand was increasing by ten to fifteen percent each year. Currently, we’re now up to fifty-two thousand.

Hudson: Jennifer, tell me about the changers you’ve seen over your 12 years here.
MacDuff: Pediatrics is probably the biggest change I’ve seen here. When I came there was a little tiny room in the back of the department for kids that had no supply in it for pediatrics. It had some colours on the walls and “Welcome Friends” on the door, but we didn’t see a lot of kids. About six years in it became a dedicated pediatric room, stet up with some resuscitation equipment and pediatric supply. Now we have a line up for that room. Kids we see are sicker, and the numbers are up because we just have more young families with kids moving into the area now.

In my neighbourhood alone there’s an eight-hundred unit condo development going in, and the people going in there are the young families. When I started here it was mainly elderly patients. We see a fair number of elderly still, and we always will as the baby boomers get older, but we also see a growing ethnic diversity with large Asian and South Asian Communities.

Hudson: Doctor, at what point did you determine changes in the ER were needed?
Hendry: Because the medical administration was seeing that our numbers were going up substantially, that we were able to expand into parts of the hospital that were close to the ER. One area, for out-patient surgical was reallocated for a cast room and for suturing. It became quite evident was that we didn’t have any pediatric, so we needed a pediatric room. We expanded at least three times by turning offices into examining rooms, and a minor treatment unit for lower acuity cases, and even in the last month we’ve expanded beyond that because volumes continue to grow. We’ve expanded piece by piece, about every two years. None of it was perfect but provided a bit more space as the volumes grew.

Walk through the emerg and you’ll see people behind curtains and down hallways. We really want to eliminate that. It’s not the medical part that’s the toughest, it’s seeing patients that have been admitted, people who ware in pain, lying in bed with no more than a curtain and a couple of sheets between them and everyone. Then add to this no privacy. You don’t get any dignity if you happen to fall asleep and turn the wrong direction, you’re exposed to everyone else. In certain areas doors are open and it gets drafty. Curtains are only so good. It’s tough.

MacDuff: Right now our patients are received by a clerk, then they sit in the waiting room. They see a triage nurse, then return to the waiting room, then they go to the reception clerk to finish the paper work and finally they get sent somewhere. Some just have to remain in the waiting room until they’re called to a bed. With our new department we’ll do the registration, reception and triage in one stop. The staff will move, not the patient. These people are elderly, or sick, dizzy, or in a wheel chair, and we’re asking them to come up three times. I feel sorry for Grandma struggling her way up and back. So that’s changed.

Patients feel better when they’re moving forward. In our new department, we will establish a flow that does just that. After triage, if you don’t get a bed right away or if you’re not sick enough to go in immediately, you’ll be moved to one of three waiting rooms which are adjacent to the labs, ECG room, X-ray so you’ll have that done. Next you’ll go into a care space to be examined, and if you do need to stay longer and if you’re not extremely sick, you’ll move to one of our care lounges where you’ll wait for your drug to work, tests to come back, or for a consultant to come in before going home or being admitted. You are always moving forward. We’re even trying to get patients to exit through a different door to enhance the notion that everybody’s moving forward and onward.

Hendry: For me it’s about function of the facility. You have to see that there’s a flow, and you hope that you’ve thought through all the possibilities. We determined where all the rooms would be, where are the ultrasounds, the computers, even where every hand washing station would be. We need to reduce walking back and forth because a bigger department means more walking. We really tried to break it down to individual departments or parts so when I’m in that part, I know where my nurses are. I can communicate well so that we can all see the patients that are there. Each unit has to be like that so whether you need a unit clerk or a nurse, they’re there and each piece works. Communication in our department is key. Knowing where the nurses are for instance, I can get what the patients need sooner rather than leaving charts and messages which may cause treatment delays.

Hudson: What do you, as a nurse, bring to a project like this that the doctor doesn’t?
MacDuff: The medical staff are in the care spaces a much shorter amount of time than the physicians. The doctors see the patient and then leave the orders for care with the nurse. They’re only called back if there’s a question or something changes in the care of that patient. But they don’t spend a lot of time with that patient. If a pediatric patient comes in with asthma for example, the nurse does the assessment, gets them changed, hooks them up to the equipment they need and deals with the parent who’s usually anxious. The doctor comes in, listens to the chest and orders some medication. The nurse gets it from the medication room, which has to be close to where she’s going to give the medication. Any resources needed must be in adjacent areas. The physician knows what drug to order, but it’s the nursing staff that knows how to use it and where to keep it. We’re the ones that know where everything is, know the policies and know the protocols to move patients through.

Hudson: How will you function while it’s going on?
Hendry: The construction is going to be done in a way that will have almost no impact on our operation. The ER will continue to operate as it is now, while the new expansion is built as a brand new building. It will be attached to the west side of the current structure, but not connected during construction. When it’s done, we’ll move everything over to the new side. Then the old ER will be renovated to match the new one, the wall will then be removed and the new big ER will be in business, hopefully by early 2018.

Next week, in our final article, we’ll talk with Ellen Kennett of the Women’s Auxiliary, who was here on opening day in 1954. For more information on the projects at Peace Arch Hospital and the Hospital Foundation go to www.pahfoundation.ca