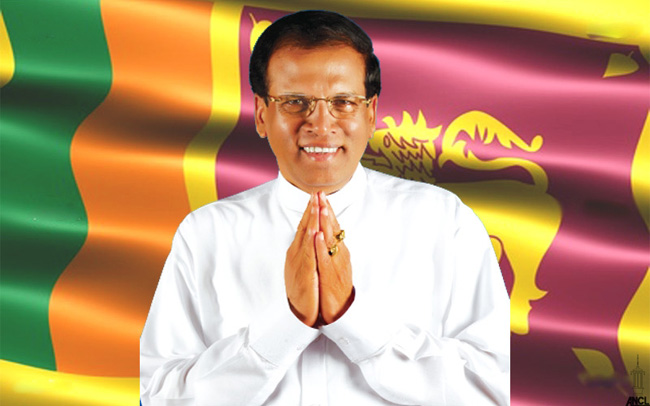 Colombo, July 14 (IANS) Sri Lankan President Maithripala Sirisena on Tuesday said he was opposed to former president Mahinda Rajapaksa being given nomination from his party to contest the August 17 parliamentary elections.

Breaking his silence over the issue after he drew criticism from his own party members, Sirisena said he never agreed to give nomination to Rajapaksa and feels he will lose the poll, Xinhua reported.
“I totally disagree with the party’s decision to grant nomination to former president Mahinda Rajapaksa. However, he will be defeated at the election, as he was defeated at the last presidential election,” Sirisena said in a special statement to the media on Tuesday.
Sirisena’s party, the Sri Lanka Freedom Party (SLFP), and its alliance partners in the United People’s Freedom Alliance (UPFA) had said Sirisena backed the decision to give Rajapaksa poll nomination in the best interest of the party.
However, after a long silence, Sirisena said he never agreed to give Rajapaksa nomination when the matter was discussed with UPFA leaders.
The president said he would remain neutral ahead of the polls and not openly support any political party.
Rajapaksa was among those named as UPFA candidates for the parliamentary elections when the final lists were handed over to the respective election offices in the districts when nominations closed on Monday.
However, Sirisena, who was elected president on January 8 after defeating Rajapaksa, said he will never go back on the mandate given to him in that election.
Sirisena is currently the president of the SLFP and the UPFA, while Rajapaksa is a senior advisor in the SLFP. However, in January, Sirisena decided to contest against Rajapaksa who was then the head of the party.