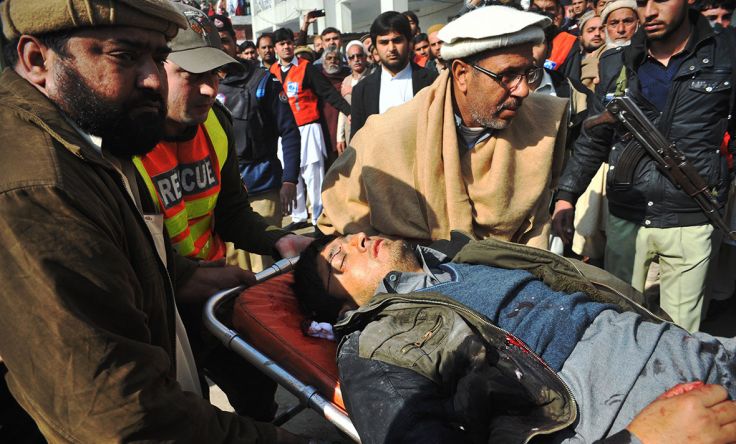 The Tehreek-e-Taliban Pakistan (TTP), which is at war with the Pakistani state, claimed responsibility for the horrific attack at Charsadda that only ended when troops shot dead all the attackers after over five hours of fighting.

By then, the terrorists had claimed 21 victims including several students, a chemistry professor, four security guards and one policeman. In sheer terror, hundreds of students and others fled the campus or bolted into classrooms in search of safety.

The morning attack started around 9.30 a.m. when some 3,000 students and university employees were at the sprawling campus besides 600 guests, many for a poetry recital to commemorate the anniversary of Khan Abdul Ghaffar Khan, popularly known as Bacha Khan.

A renowned Gandhian, Bacha Khan was a close associate of Mahatma Gandhi.

Student Ayat Ibrahim told IANS that she was entering the South Block of the university when she heard the first of the gunshots and huge blasts — the terrorists also hurled grenades.

“I saw people screaming and running here and there, and people sprawled on the ground,” she said in a telephonic interview from Peshawar.

The attackers indiscriminately fired at anyone and everyone they saw. Ibrahim said she like many others ran towards the university buses parked in the vicinity.

As they filled up, the drivers drove away the buses to safety.

Witnesses and officials said the terrorists scaled the walls of the university and immediately scattered in different directions, firing away.

Two of them who had got on to the roof of two buildings were shot dead by army snipers. Media reports said the attackers wore suicide vests but were killed before they could detonate their explosives.

As the gun battles raged, military helicopters flew overhead. “The operation is over and the university has been cleared,” General Asim Bajwa, DG of the army’s Inter-Service Public Relations, later said. “Four gunmen have been killed.”

“Sharif is deeply grieved,” his office said. Sharif, now in Zurich, called it a “cowardly attack” and said the terrorists “have no faith and religion”.

Modi tweeted: “Strongly condemn the terror attack at Bacha Khan University in Pakistan. Condolences to families of the deceased. Prayers with the injured.”

According to Dawn, the TTP Geedar group claimed the attack through a post on a social media page. It said four attackers were sent to the university. But TTP spokesperson Mohammad Khorasani condemned the attack, terming it “against Shariah”. The TTP is split into many factions.

Provincial Chief Minister Pervez Khattak was told to cut short his trip to Scotland and return to Pakistan.

Cricketer-turned-politician Imran Khan, who belongs to the Khyber Pakhtunkhwa province, said he will visit the campus to identify loopholes in the security system.

On December 16, 2014, the TTP massacred over 150 people, nearly all of them young students, at the Army Public School in the province, triggering revulsion not only in Pakistan but around the world.