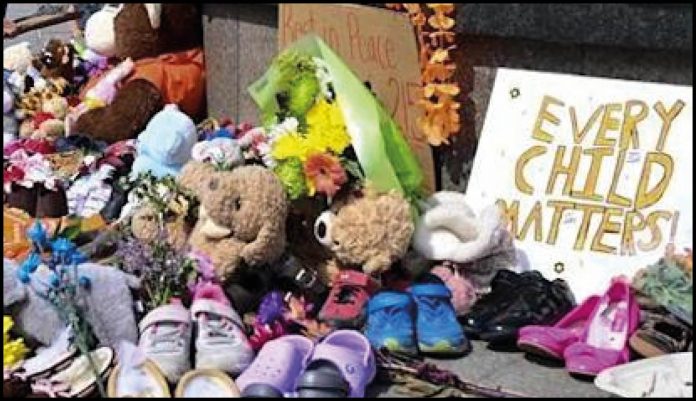 Kamloops: Percy Casper, 73, spent 10 years as a child at the former Kamloops Indian Residential School in British Columbia.
He has spent the past year grieving.
A member of the Bonaparte Indian Band near Cache Creek, B.C., Casper said he was deeply distraught when he heard the news last May, when Kukpi7 Rosanne Casimir, Tk’emlups te Secwepemc Nation chief, announced that a war graves expert using ground-penetrating radar had located 215 suspected unmarked graves at the site of the former school.
So, Casper grieved, for lost classmates, and for himself. His emotions twisted into a painful knot when Indigenous leaders later visited the Vatican to meet the Pope, who represents the church that he says abused him.
But his spirits have been lifted by strangers, he said.
“Families have walked up to me and literally put their hands out and said they were ashamed of who they were on account of what we went through,’’ he said.
Casper’s emotional journey echoes a year of reckoning for Canada as it confronts the legacy of its residential school system for Indigenous children. The findings in an old apple orchard would reverberate from British Columbia’s Interior to Ottawa, the Vatican and beyond.
The discovery represented what Casimir called at the time, an “unthinkable loss.’’ The existence of unmarked graves had been a “knowing’’ among school survivors and elders, but the high-tech survey represented confirmation for Canada, she said.
The detection of hundreds more suspected graves connected to residential schools across the country would follow.
“When I look back and reflect with having to share with the world the findings of the unmarked graves, it was something that was devastating personally as a mother and a grandmother and as a leader,’’ Casimir said Wednesday at a news conference.
She described the past year as “very traumatic.’’
A daylong cultural ceremony is set for Monday at the Tk’emlups te Secwepemc Pow Wow Arbor to mark the anniversary of findings, which Casimir said “confirmed the children that didn’t come home.’’
Prof. Geoff Bird, an anthropologist at the school of communication and culture at Victoria’s Royal Roads University, said the unmarked graves represent a profound moment in the nation’s history.
“The discovery of children buried in residential schools across the country was perhaps, I would say, the most traumatic event in recent Canadian history in terms of defining who we are,’’ Bird said.
“When you actually have a discovery such as this, it can’t do anything but impact the nation and its perception of itself,’’ he said.
Bird, an expert on cultural memory and war heritage, said Canada could not ignore the harsh realities of the residential school experience, even as it grappled with other issues, like climate change or the ongoing COVID-19 pandemic.
“The whole field of cultural memory is what we remember, what we forget, what we silence,’’ he said. “We can’t be blind to our own history.’’
There have been previous attempts to face that history. A 4,000-page report in 2015 by the National Truth and Reconciliation Commission detailed harsh mistreatment at residential schools, including emotional, physical and sexual abuse of children, and at least 4,100 deaths at the institutions.