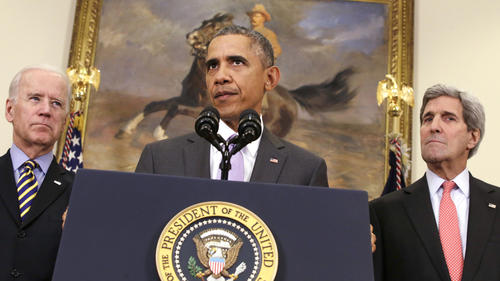 Washington, Feb 20 (IANS) With a global summit to counter violent extremism under way, US Secretary of State John Kerry called for building a “global partnership” to give a collective response to the rising threat of extremism.
“Toward that goal of unity, and of action, President Obama has been hosting a summit in Washington this week that is bringing together leading figures from local and national governments, civil society, and the private sector around the world,” Kerry wrote in an opinion piece published on the Wall Street Journal Thursday, Xinhua reported.
The US is hosting a three-day summit on countering violent extremism in Washington since Tuesday, which is attended by senior officials from about 65 countries.
The summit was convened after a recent wave of terror attacks swept through Paris, France and Copenhagen, Denmark, leaving more than a dozen of people dead in the hands of extremists targeting anti-Islamic cartoonists and Jews.
“This summit at the White House and State Department would expand the global conversation and, more important, adopt — an action agenda that identifies, shares and utilises best practices in preventing and countering violent extremism,” Kerry wrote.
“Put simply, we are building a global partnership against violent extremism,” Kerry said, while admitting that this summit would not solve all the problems.
“We also know the power of the international community to make positive progress when we have come together to combat other challenges, such as when we combined our efforts most recently to fight Ebola,” he noted.
Kerry emphasised the need to funnel more resources, creative ideas and energy into the fight against extremism and work closely with effective local organisations and governments to make sure those resources are used properly.
Claiming that military force alone won’t achieve victory, Kerry called for showing the power of peaceful communities and tackling bad governance that breeds frustration as ways to fight violent extremism, which he described as “the pre-eminent challenge of the young 21st century.”
Repeating a major message by President Barack Obama that the U S rejects the idea of being at war with Islam in the fight against violent extremism, Kerry said the world community should not be distracted by divisions grounded in hatred or bias.
“There is no room in this fight for sectarian division. There is no room for Islamophobia or anti-Semitism. Violent extremism has claimed lives in every corner of the globe, and Muslim lives most of all.
Each of us is threatened, regardless of ethnicity, faith or homeland,” the top US diplomat said. “We must demonstrate to the terrorists that rather than divide us, their tactics unite us and strengthen our resolve.”
Kerry also revealed that when world leaders gather at the UN General Assembly in fall, a key topic of discussion would be the steps to be taken to fight extremism based on the agenda outlined at this summit.