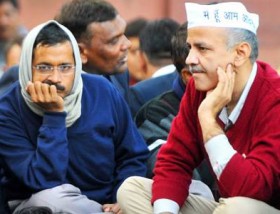 Ghaziabad, March 17 (IANS) A month after it won a spectacular victory in Delhi, the Aam Aadmi Party (AAP) announced on Tuesday that it has decided to go national.
“We have decided to expand nationally,” party leader Sanjay Singh told the media after a meeting of AAP leaders at the residence of Delhi Chief Minister Arvind Kejriwal here.
The AAP’s Political Affairs Committee (PAC), its highest decision making body, also decided to enrol “active volunteers” and to form a committee to decide their role in different states.
The AAP, India’s youngest political party, would also decide where it should contest elections, Sanjay Singh said.
The announcement marks the most significant decision taken by the AAP following the return to Delhi on Monday night of Kejriwal after 10 days of naturopathy treatment in Bengaluru for nagging cough and high blood sugar.