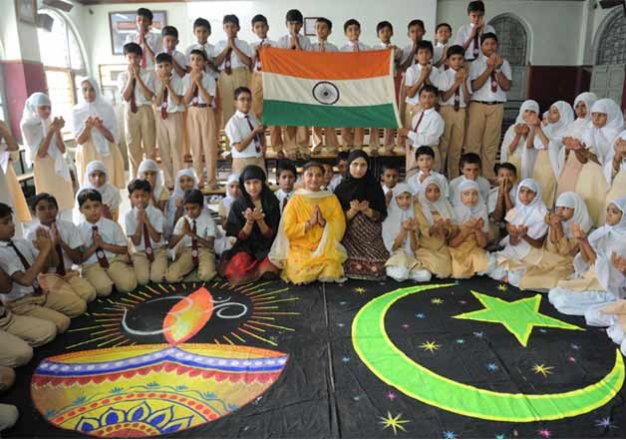 Patna, May 19 (IANS) Muslims in Bihar, in a stellar demonstration of communal harmony, have donated land to help build the world’s largest Hindu temple which will have the capacity to seat a staggering 20,000 people.

“Muslims have not only donated land, they have also provided land at a nominal rate for construction of the world’s largest Hindu temple. Without help of Muslims, it would have been difficult realise this dream project,” Acharya Kishore Kunal, secretary of the Patna-based cash-rich Mahavir Mandir Trust that is undertaking the ambitious project, told IANS.

Kunal, a former Indian Police Service officer, said that Muslims have come forward to ensure that the temple comes up soon. The construction of the temple will commence in June at Janki Nagar near Kesaria in East Champaran district, about 150 km from here. It will cost over Rs.500 crore.

Kunal said that more than three dozen Muslim families have their land in the middle of the proposed location of the temple and some Muslims families have land along the main road that connects to the project site.

“Some Muslims donated lands and others helped and supported us to purchase their land for the temple. If Muslims had not come forward, the temple project was sure to have got delayed…”

He said that Mahavir Mandir Trust has obtained 200 acres of land. “Hindus and Muslims have donated about 50 acres of land and the remaining has been purchased.”

Earlier, some Muslims had helped build a Hindu temple dedicated to Goddess Durga in Gaya district, another temple was dedicated to God Shiva in Begusarai district and in Sitamarhi district.

Mumbai-based Valecha Construction Company will construct the temple, which will be 2,500 feet long, 1,296 feet wide and 379 feet high.

“The temple will be earthquake proof (since it) is near the Nepal border,” Kunal said.

Gurgaon based Radheyshyam Sharma, director of Indgenious Studio Pvt Ltd, will look after the architectural aspects.

He said the Virat Ramayan Mandir will be taller than the world famous 12th century Angkor Wat temple complex in Cambodia, which is 215 feet high. The complex will comprise 18 temples with high spires and its Shiv temple would have the largest Shivling in the world, another distinction.

He said the temple would have a seating capacity of 20,000 people in the hall facing the main temple having the idols of Ram, Sita, Luv and Kush. According to him, no temple in the world has such a huge seating capacity.

He said the temple was to be named “Virat Angkor Wat Ram Mandir”, but later its name was changed following objections by people in Cambodia.

Angkor Wat was built during king Suryavarman’s rule and is today a Unesco World Heritage site.