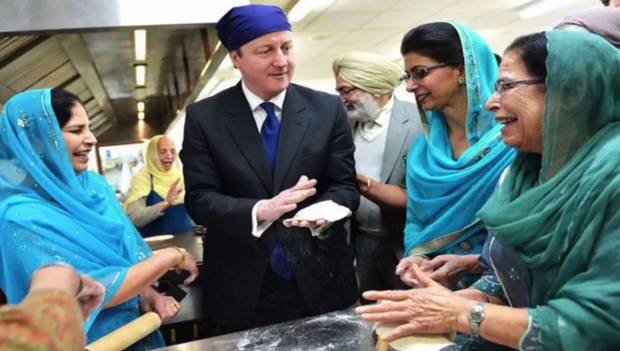 As the campaigning for the British parliamentary election enters its final phase, Prime Minister David Cameron and other leaders are eyeing undecided voters, especially among the 700,000 strong community of Indian origin.

Ironically, Britain – the oldest democracy in the world – could see this community play a major role in deciding the next government.

The two main parties – Cameron’s Conservatives and Ed Miliband’s Labour – are neck-and-neck since the hustling started on March 30. Both have secured about 35 percent of votes in the surveys, which is not enough to muster a majority in parliament. Both are predicted to win about 280 seats each in the 650-member House of Commons.

Nick Clegg’s central-left Liberal Democratic party, Cameron’s coalition partner, can be the kingmaker, securing about 30 seats despite its erosion of support, especially among the young over the hiking of university tuition fees.

The rightwing UK Independence Party is expected to bag just two or three seats but can be a spoiler for the Conservatives in many seats. The Scottish Nationalist Party, which has sought independence from the union, is predicted to win almost all the 59 seats in Scotland.

A survey conducted by BBC Asian Network/ICM has shown that nearly a quarter of Asian voters are yet to make up their minds about the ballot. The survey also found that, of those who had decided, 39 percent said they may change their minds before polling day Thursday.

The survey indicates that Asian vote in Britain, traditionally considered to lean towards Labour, is still up for grabs.

Asians constitute just about five percent of the British population but they are crucial in 168 marginal seats including Southampton, Oxford, Sherwood, Ipswich and Northampton.

The Tories secured only 16 percent of the ethnic minority vote in the last election, compared with 68 percent for Labour. But the scenario has been changing since 2010.

The Conservatives, under Cameron’s leadership, overhauled the party to shed its ‘nasty party’ image. He opened the doors of 10 Downing Street to celebrate Eid, Diwali and Baisakhi.

Cameron promoted several Asian British like Baroness Sayeeda Warsi to the party’s key posts. Cameron also elevated Indian-origin MP Priti Patel to a key post in the treasury. Former banker Sajid Javid is wielding immense power as culture secretary and was the brain behind the installation of the Gandhi statue at London’s Parliament Square.

The party has chosen 56 Black and Minority Ethnic (BAME) candidates in England and Wales. The list contains 12 candidates of Indian origin.

Rishi Sunak, son-in-law of Infosys’ N.R. Narayana Murthy, is among the new candidates. He is contesting from the Tory stronghold of Richmond, the seat of former foreign secretary William Hague.

Labour is fielding 52 ethnic minority candidates, including Keith Vaz from Leicester East, Virendra Sharma from Southall and Seema Malhotra from Feltham and Heston.

A study by British Future predicted that the Commons could see more than 40 BAME MPs from this election, up from 27 in the last parliament. According to the 2011 census, the BAME population in Britain is at 14 percent, meaning the country needs 91 BAME MPs to reflect the society.

Cameron promised to increase the number of BAME MPs through his 2020 Vision agenda. He has promised to allocate 20 percent of the new Conservative candidates in retirement seats to a candidate from a BAME background.

The Labour party will surely match up with a similar commitment. The new initiative will change Britan’s socio-political landscape of Britain for ever.

(Anasudhin Azeez can be contacted at md@asianlite.com. The views expressed are personal)