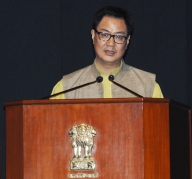 On September 9, the Chinese army intruded 45 km inside Arunachal Pradesh’s Anjaw district and set up a temporary shelter at ‘Plum Post’, an Indian official told IANS on condition of anonymity.

“The Indian Army held a Flag Meeting with the PLA on September 14 at Damai area under China to defuse the intrusion. Initially, they (PLA) claimed that the Plum Post area belongs to them,” the official said.

When IANS contacted, Arunachal Pradesh Home Minister Kumar Waii said, “I do not like to comment anything on it now. I am waiting for the reports.”

Last month, Union Minister of State for Home Kiren Rijiju had told journalists that the reported intrusion by Chinese Army into Indian side in Arunachal Pradesh was “not intentional” and may have happened as there were no clear demarcated border lines in the Line of Actual Control along the Indo-China border, in some areas of the frontier state.

Rijiju had said there were two cases of intrusion by the Chinese Army in Arunachal, one in Kibitho in Anjaw district and another reported in Thangsey area in Tawang district where the Chinese soldiers reportedly intruded in Indian Territory by crossing the LAC.