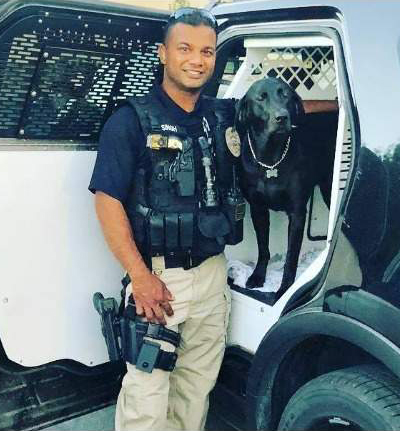 New York: An Indian-origin police officer was shot and killed by an unidentified man during a traffic stop in the US state of California, officials said.

Officer Ronil Singh, 33, had been working with the Newman Police Department since July 2011. He was shot and killed during a traffic stop when he was “working overtime on Christmas night to provide the best for his family”, police officials said.

The Stanislaus County Sheriff’s Department, leading a probe into Singh’s death, said that the incident took place when he called in a traffic stop at Merced Street and Eucalyptus Avenue in Newman.

“Moments later, he called out ‘shots fired’ over the radio. Multiple officers responded and found that Singh had been shot.”

He was taken to a hospital, where he later died, the Sheriff’s Department said, adding that the suspect fled the scene in a grey, extended cab Dodge Ram pickup before responding officers arrived. His truck was later found on River Road, just outside of Newman.

The Department released surveillance photographs of the suspect, asking for any information about his identity.

The suspect purchased two 12 packs of beer along with a pack of cigarettes, according to the convenience store where his picture was captured on surveillance tape.

The California Highway Patrol (CHP) described him as Hispanic. “Suspect is considered armed and dangerous and may be in possession of a firearm,” the CHP said.

Singh was a native of Fiji and had immigrated to America, KCRA3 reported. He was a veteran of over 7 years at the Newman Police Department and was assigned as a canine officer. He earlier served with the Merced County Sheriff’s Department.

Corporal Singh is survived by his wife, Anamika, and 5-month son.

Flags at the California Capitol flew at half staff in honour of Singh.

“On behalf of all Californians, I extend our condolences to Corporal Singh’s wife, young son, loved ones and colleagues. Our hearts are with the entire community of Newman and law enforcement officers who risk their lives to protect and serve the people of California,” Governor Jerry Brown said in a statement.

The New York City Police Department said: “We mourn the loss of this hero and send our condolences to his friends, family and colleagues.”

The Indian Officers’ Society at the NYPD tweeted that Singh was killed in the line of duty and recalled his service to the community.