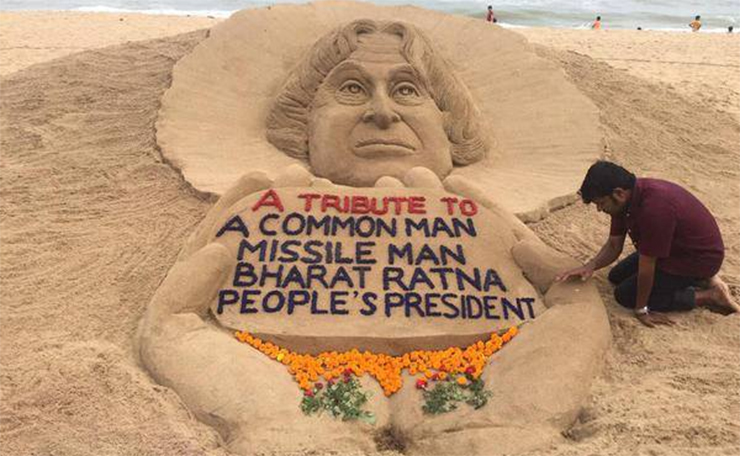 Chennai/New Delhi, July 28 (IANS) The last rites of former president A.P.J. Abdul Kalam will take place with full military honours in his hometown Rameswaram in Tamil Nadu on Thursday following his family’s wish, it was announced on Tuesday.
The home ministry in an official statement confirmed that Kalam would be accorded a state funeral and the last rites would take place at 11 a.m. on Thursday.
“State funeral of former president Dr. A.P.J. Abdul Kalam will be held with full military honours on July 30 (Thursday) at 11 a.m. at Rameswaram in Tamil Nadu,” the statement said.
The body of the former president, who died on Monday in Shillong after collapsing while delivering a lecture at the Indian Institute of Management, was flown to Delhi on Tuesday morning.
A.P.J.M.K. Sheik Saleem, the former president’s brother’s grandson, told IANS over phone: “A large number of relatives, friends, well wishers and common people have gathered at Kalam’s house at Rameswaram.”
The coastal town of Rameswaram, a Hindu pilgrimage centre, is located around 600 km from Chennai in Ramanathapuram district.
Kalam was born in Rameswaram and spent his young days battling poverty there.
According to a Rameswaram official, the administration is gearing up to make necessary arrangements as thousands would assemble in the town to pay homage.
The family members were discussing the site where Kalam’s last rites could be conducted.
Saleem said Kalam’s body was expected to reach Rameswaram after noon on Wednesday.
“Till evening people will pay homage to the departed soul. After that his body will be taken to his house. We plan to have the last rites on Thursday,” Saleem said.
Many people, including students, on Tuesday paid their respects at the portrait of the former president kept in the ‘House of Kalam’.
Tourists visiting Rameswaram also made a beeline to Mosque Street where Kalam’s house is located to pay their respects to the “People’s President”.
Silent rallies, prayers and candlelight vigils were organised in many parts of Tamil Nadu to mourn his death.
In many districts, schools and colleges were closed as a mark of respect.
Fr. Ladislaus Chinnadurai, who taught physics to Kalam at St. Joseph’s College in Tiruchirapalli, told the media that his illustrious student learnt modern physics which helped him do research.
In Chrompet suburb, traders closed their shops as Kalam had studied in the Madras Institute of Technology (MIT) situated in that locality.
As a mark of respect to Kalam, shops would also be closed on Thursday across the state, the traders association said.