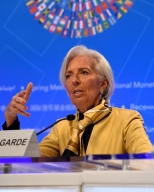 United Nations: International Monetary Fund Managing Director Christine Lagarde has said that Prime Minister Narendra Modi and the Indian authorities should pay more attention to women’s issues in the aftermath of the rape of an eight-year-old girl in Kathua district of Jammu and Kashmir.

Answering a question at a news conference in Washington on Thursday about the Kathua incident, she said: “What has happened is just revolting.”

“I would hope that the Indian authorities, starting with Prime Minister Modi, pay more attention because it is needed for the women of India.

“When I was last in Davos, after Prime Minister Modi’s speech, I did tell him that he had not mentioned the women of India enough,” Lagarde said.

But, she added, “it is not just a question of talking about them”.

Modi delivered the opening plenary address at the World Economic Forum in Davos in January.