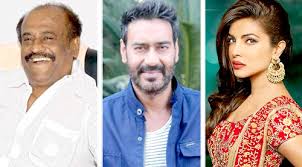 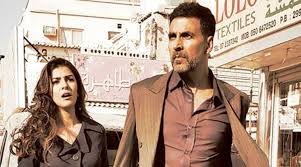 RAJA MENON’s critically acclaimed film AIRLIFT, based on the evacuation of over 175,000 Indians from Kuwait after Iraq’s invasion in 90’s, has brought smiles to the faces of Indians around the world and Bollywood in particular after collecting over Rs.75 Crores in 5 days and sure seems set to become the first film of 2016 to cross Rs.100 Crores at the box-office. While the film has been banned in Kuwait over the objections of many Indians living there for inaccuracies and many Indian diplomats are contesting the film version, the film has been gaining momentum day by day as Indians are feeling proud for the Republic Day release and the film has already crossed Rs.100 Crore worldwide and could become the highest grosser of Akshay Kumar’s career. The critics and general public have lavishly praised Akshay Kumar’s acting and many are predicting him as a strong contender for acting honors and I must add that I too witnessed standing ovation by the general public after the screening of the film at a Delhi PVR during my recent trip to India. Well done Raja, Akshay, Nimrat and everyone else involved with AIRLIFT! 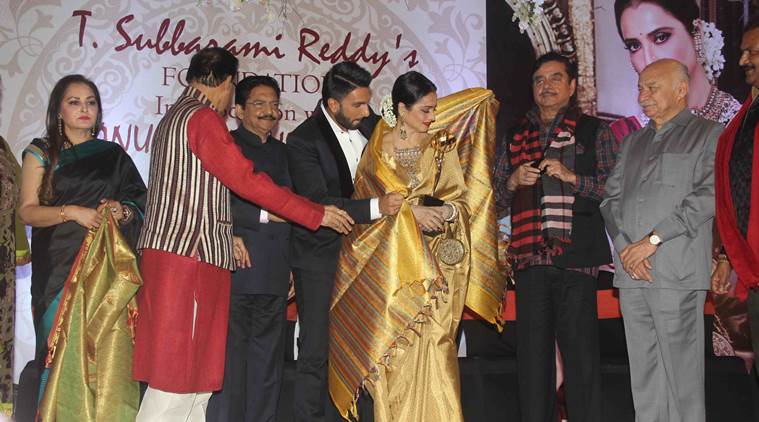 T.S.R. Foundation of T.SUBBARAM REDDY presented the 3rd YASH CHOPRA Memorial Award to actress REKHA for her contribution to Indian Cinema at a glittering function in Mumbai in the presence of many bollywood personalities. The jury comprising of Simi Grewal, Pamela Chopra and many others were unanimous in their decision to award the Gold medal with Rs.10 lakh cash to REKHA GANESHAN, who was directed by Yash Chopra in SILSILA. Lata Mangeshkar & Amitabh Bachchan were the previous recipients and SRI DEVI, RANVEER SINGH, PARINEETI CHOPRA were among the invited guests. KVP Entertainers & ASIAN JOURNAL congratulates REKHA JI for the recognition! 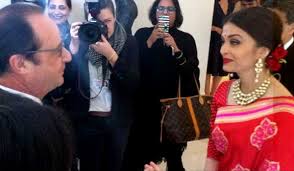 AISHWARYA RAI BACHCHAN, recipient of KNIGHT of the ORDER of ARTS & LETTERS and a regular at Cannes International Film Festival & Paris fashion shows, was one of the prominent guest of the French Ambassador at a special luncheon for visiting French President Francois Hollande and she sure charmed the President and other guests. Designer Ritu Beri & Manish Paul were also there at the function along with many more from Arts & Entertainment but it was Aishwarya show all the way and the President seemed totally floored by the Indian beauty ! Ekta Kapoor’s sex comedy KYA KOOL HAI HUM 3 fizzled out after an initial strong showing and posted Rs. 28 Crores in first week, however, Akshay-Nimrat’s AIRLFT is going strong and may continue the showing in second week as well inspite of the release of RAJKUMAR HIRANI’s SAALA KHADOOS with MADHAWAN & RIKA SINGH and MASTIZAADE with SUNNY LEONE ( in double role ), VIR DAS & TUSHAAR KAPOOR. FARHAN AKHTAR has separated from hair dresser wife ADHUNA AKHTAR as strong rumours are flying around of  Farhan’s relationship with a costar and the possible names circulating are ADITI RAO HYDARI of WAZIR fame, SHRADDHA KAPOOR of his upcoming ROCK ON 2 & PRIYANKA CHOPRA, his costar in Zoya Akhtar’s DIL DHADAKNE DO. KABIR BEDI has married for the fourth time to at least 30 years younger long time girlfriend PARVEEN DUSANJH and congratulations to actress ASIN for marrying businessman RAHUL SHARMA at a glittering function in Mumbai. And it’s time to say good bye but not before reminding you all to watch this week’s YAADEIN featuring patriotic songs to commemorate India’s 67th Republic Day celebrations on Sunday, Jan.31st @ 1 PM on SMC#116.