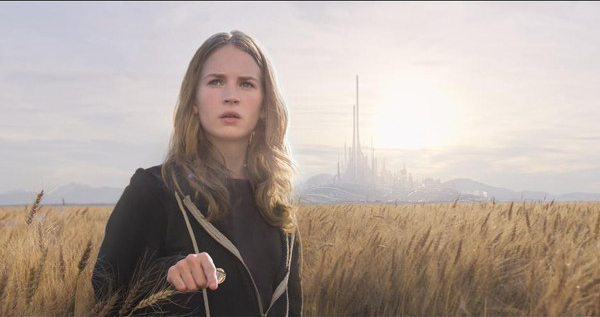 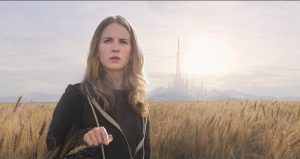 Gadgetry and a quest to learn land a kid in all sorts of adventurous trouble in Tomorrowland. Sparks fly often in This child-oriented kids flick from Disney now playing at Cineplex Odeon cites around BC.
If you dream might as well dream big. Boy wonder Frank Walker is a Case in point. All grown up hunk George Clooney portrays the kid as an adult and now some of his youthful zest is coming back up to haunt him. Way back when Frank was a childhood inventor who no one took that seriously. Given a chance by a little girl our boy wonder gets whisked away to a zone in The future. Returning to Earth the secret to this impressive society is kept a closely guarded secret.

Flash forward 40 odd years and the now reclusive closet inventor gets. New lease on life when two “modern” girls seek him out to go back to this never never land,. Reluctant to take the urge to depart for possible greener pastures poor Frank gets hooked into a race against time battling know it all intellectuals bent on keeping their earth-shattering discoveries to themselves.
Impressive special effects and unbelievable sets help turn the B.C. Filmed fantasy into a fanciful yard full of wonder and hope.