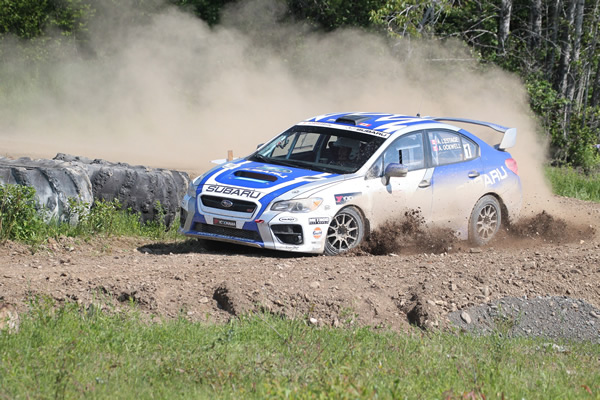 MISSISSAUGA: Subaru Canada, Inc. (SCI) is excited to announce Subaru Rally Team Canada’s (SRTC) victory at the second Canadian Rally Championship (CRC) event of the 2015 series at Rallye Baie Des Chaleurs. Taking place in New Richmond, Quebec, on June 27 and 28, the entire team was pushing the Subaru WRX STI and themselves to new limits as the comfort levels and precision build quality of the rally vehicle continues to be fine-tuned.
Antoine L’Estage, SRTC driver, and Alan Ockwell, SRTC co-driver, had a hard fought battle throughout the entire weekend, not accurately portrayed by the team’s three-minute and 25-second victory. SRTC added two and a half minutes to their winning time in the last four stages of the event. Out of a total of 13 stages L’Estage and Ockwell were victorious in 10 and won every stage on the second day of the event.

“It has been a while since I’ve pushed a vehicle to that limit – the car was absolutely flawless and had no issues besides a small electrical problem early on day one,” said L’Estage. “Thanks to the Rocket Rally Racing Team for preparing a great car and making some big improvements for this event, I’m very happy to win my first gravel rally with Subaru Rally Team Canada.”
“We had a very good battle with Joël Levac in a WRC vehicle, but we managed to step it up when needed and had some really good stage times,” said SRTC co-driver, Ockwell. “In some instances we were absolutely full speed with nothing left and we’re able to push that hard knowing that the Subaru WRX STI is working brilliantly. We know it’s reliable, we know it’s solid, and that allows us to move our focus on improving the performance a little here and there.”
Rocket Rally Racing has been managing Subaru Rally Team Canada to the highest degree in every regard and leaving nothing overlooked. Simon Drake, Chief Mechanic for Rocket Rally Racing and Subaru Rally Team Canada, admits there were a few very minor issues but the pace of the team was impressive. “This was a very good weekend – our main issue was tire pressures, as it was very hot out there. The speed and grip levels we had took a toll on the front tires, so we played around with suspension settings and tire pressures to give the team an opportunity to attack more.”
After winning the first two CRC events SRTC is currently in first place for the CRC title, as well as driver and co-driver championships and have their eyes locked on the next event (Rallye Défi) on September 11 and 12 in Ste-Agathe, Quebec