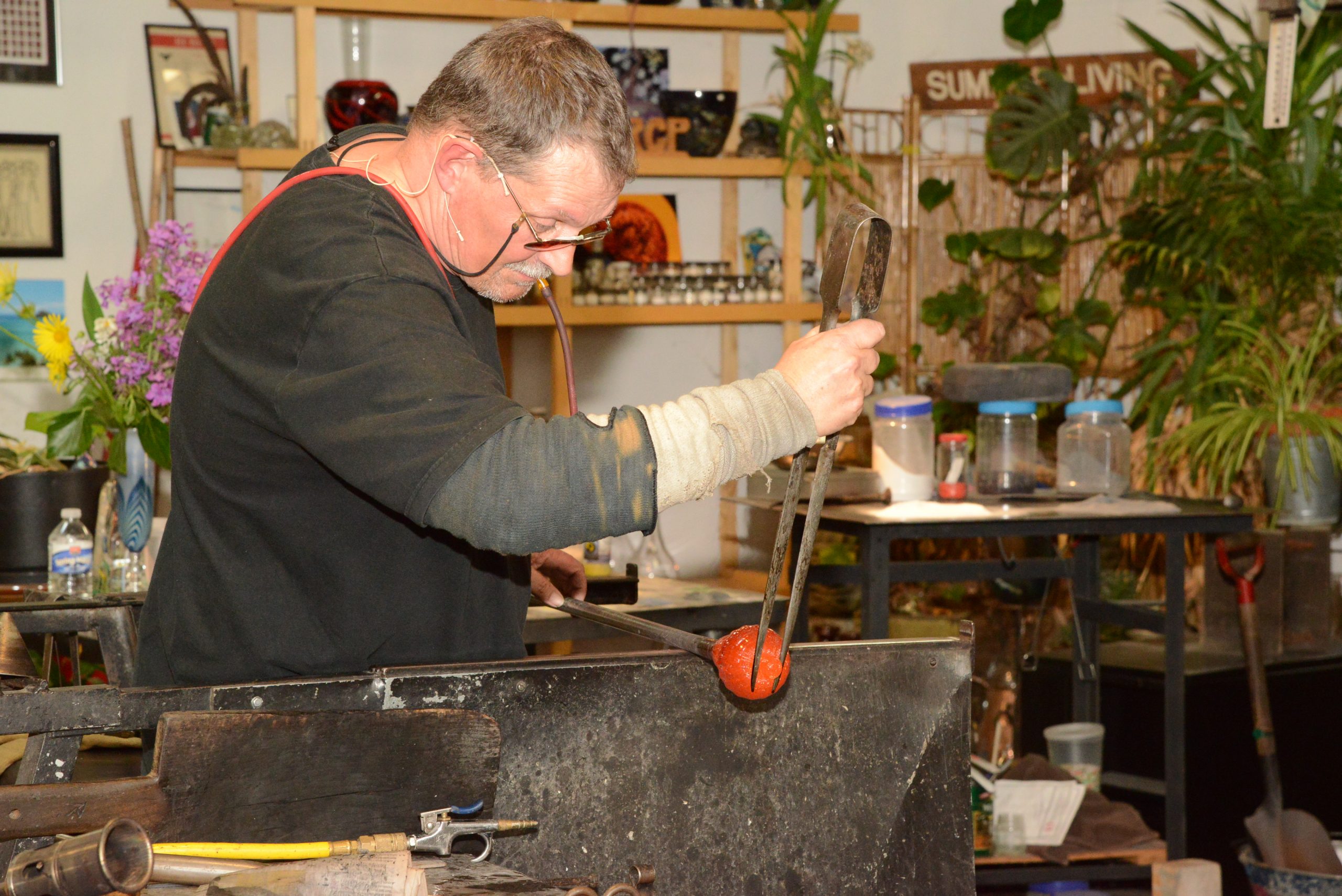 by Ray Hudson
Surrey: Tucked away on a picturesque farm in Port Kells, in a non-descript outbuilding with a loafing shed attached to the back, Master Glassblower Robert Gary Parkes works with the strong passion to create breath-taking treasures out of glass. Although he still runs a few head of cattle, it’s been a long time since the studio building had any agricultural purpose. Inside is some of the most sophisticated glass making equipment available and a gallery that stores and displays the spectacular work that is gaining Parkes an international reputation.
“I started building stained glass windows in 71 as a hobby and by 78 I was fully employed. To pay the bills, Parkes was working at dry-walling, doing restoration repair of custom work that came along, all in the lower mainland and Vancouver Island.

He really wanted to become a glass blower, but with only three firms in Vancouver, chances weren’t very good until a friend told him Master Glassblower, Robert Held was setting up a new studio in Kitsilano. Determined, he drove his old pickup truck to the plant, arriving at the moment that Held’s wife was firing the drywaller.
“I was standing right there. I said I was there to see Bob Held but seeing they were building the studio and offices, I said I could do that too, and just like that, I was hired.”
We became an apprentice under a federal government program which, included such crafts. Unfortunately, in a change of government the Apprenticeship Program was reduced to industrial trades only.
“I have my ticket,” Parkes says, “but I’d like to change the government’s mind because I’d love to be able to certify the young people I’m training. Unfortunately Canada’s asleep that way and I’ve kind of given up.”
Over the next twenty-three years he was hugely successful.
“I was operating a huge glass-blowing facility, sending glass all over the world. We even did stuff for the Queen! I was responsible for seventeen glass-blowers, directing the flow of production and dealing with the interpersonal relationships of the staff.”
“Waterford Crystal was one of our big clients and we had sent out six months production worldwide when they declared bankruptcy. We never got paid. Then the 2008 recession hit, and the owner’s marriage breakup did the rest. The company folded.”
“I saw it coming, but I still went through a deep depression. I was 56 years old, we were in the middle of the recession of 2008. There wasn’t anything in the mainstream for me. My wife and kids sat me down one night and said “let’s build a glass studio.”
The Studio:

“Our opening was just like Field of Dreams; build it and they will come. Mayor Dianne Watts got on board because the City of Surrey started the Arts and Culture movement, the Economic Development Department came out and did a film on me. I also became one of the suppliers of gifts the city gives to important visitors. The first one was for Jim Pattison who donated the Outpatient Centre. I made a massive beautiful vase and I was introduced at the presentation. Next were gifts for Bill Clinton and George Bush who attended the Economic Summit, and it’s just grown from there.”
As far as the craft side, Parkes figures half of his job now is passing along what he knows. He has several students who pay him to teach them one on one in one-hour workshops.
“I’ve had one fellow here for five years,” says Parkes. “He’s so driven and interested in the field that he comes and works for me for free, and I teach him the craft.” 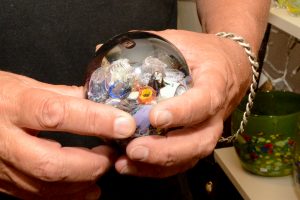 Working with glass: like working with honey, same consistency, except honey’s safe.
“You have to have a real respect for the material. We have a saying in the craft, the glass is going to play with you, your job is to learn to play with the glass, and it takes years. If you make an error with glass, that’s it. You start over. You know what you want to create, but to coordinate that with the movement of your arms and hands is the challenge.”
While blowing air into the glass, Parkes often needs to control the shape by hand. With 2,000 degree glass, you do that by holding a thick wad of wet newspaper between you and the glass. The steam and the carbon ensure that the glass doesn’t directly touch the newspaper (or your hand). You can also work with the viscosity of the glass to use gravity to shorten or lengthen the glass. Weight of the glass is another challenge. When you’re working with a 10 pound ball of glass on the end of a pipe, for every foot you are away from the glass you double the weight. It’s very physically and mentally demanding. 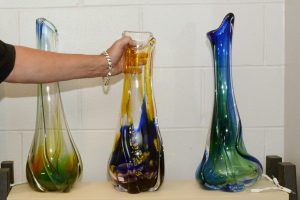 Favourite work:
“I’ve been working on a colour-flow series of vases that contain 24kt gold. I also love paperweights, and this series of what I call my Tide Pool series that’s been picked up for the permanent collection of the Surrey Art Gallery. This has made me a recognized glass artist, after forty years of working in the business. Now I’m expanding the series in to vase shapes as well with a kind of underwater scene.”
Most exciting event:
“I took my young kids out for trick or treating at a house in Fleetwood. When they opened their door, the lady had seven of my vases on her mantle. That was the first time I’d seen my work in another person’s home. I’m also pleased that some of my pieces are on display in the Surrey Art Gallery, and we have an opening of my work in the Richmond Art Gallery on July 18. I’m kind of excited about that. 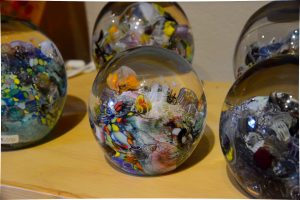 Still to do:
“I would like to have a retrospective show in a recognized gallery that show’s my entire collection. I have literally hundreds of pieces of glass that span the length of my career from when I was an apprentice and knew nothing about glass to now, when I know a little bit more.”
What is a loafing Shed? It’s not quite a barn, where cattle can shelter from the winter weather.
Visiting the Loafing Shed Studio/Gallery:
Visiting information is available at www.loafingshedglass.ca Tel: 604.612.2753