Annual freshet on the Fraser is underway

We had an extraordinary winter this time around. Snowpacks of two and three times normal amounts and late snowfalls were magic for people who love to ski, snowboard and enjoy the apres-ski life. This spring, however, most people lost interest in the slopes while there was still more snow left, than falls all winter in some years, and everywhere else at lower altitudes, when it wasn’t snowing, it was raining with the velocity of tropical monsoons.

So what happens when the weather eventually warms up and warmer rain falls? The water runs off the mountains and highlands into the streams and rivers, into the lakes and ultimately into the major river systems like the Fraser, Columbia Skeena and Peace on to the sea in a process called the “freshet”.

This spring, the cool weather patterns deposited huge amounts of snow and rain, and when the weather did turn, it started to melt. It couldn’t run off fast enough. When the ground, and the streams could contain no more water, we saw road and bridge washouts, landslides, sink holes and flooding. The rivers and streams that run into the Okanagan, Nicola, Lillooet and Shuswap lakes systems, became engorged and jumped their banks, carving out new channels, destroying property and even taking lives. The lakes became filled beyond their capacity. Flooding has occurred in Salmon Arm, Kelowna, West Kelowna, Vernon, and almost everywhere along water courses. Normally clear, docile rivers like the Similkameen have become roaring chocolate-coloured torrents of destruction. At this time the over-full Okanagan Lake, driven by high winds, has spilled over onto highway 97 just south of Peachland.

The bad news is that it isn‘t over, but the good news is that much of the snowpack has melted enough, that what remains (and there are still substantial amounts) will not likely aggravate the problem.  The hazard will now come in the form of heavy rain. 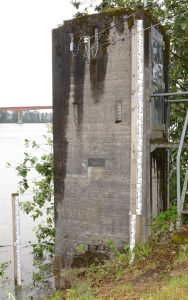 Dave Campbell is the Director of BC’s River Forecast Centre. He and his team have the job of

monitoring, analyzing and forecasting the streamflow conditions around the province, by using a variety of scientific techniques to determine where and to what extent the freshet will have the most impact, so action to mitigate this annual phenomenon can be undertaken.

We have seen the result of the flooding in the interior communities, lakes and rivers over the last month or so. As the lakes begin to stabilize and subside, the excess water goes to the big rivers; the Okanagan drains into the Columbia River, and about one-third of the province drains into the Fraser River system which will pass through the highly populated lower mainland.

Dave Campbell spoke with Ray Hudson immediately following the completion of his March to June report.

“Definitely we’ve gotten to the time of year when the snow-melt and rain we’ve had over the last month and a half has built up and we’re at a peak period for many of the bigger rivers across the province,” Campbell said. “We’re seeing that in the Okanagan where lake levels are getting near their peak.” He went onto say that the Fraser River and its tributary rivers like the North and South Thompson & Shuswap systems, the Nechako, The Harrison and Lillooet Rivers, Nicola and many others are in the same process.

He was asked about the current flow levels of the Fraser River at the key measuring points and how high it was expected to go?

“We saw a major high flow come through last weekend, up to about 9,800 cubic metres per second (written m3/s) at Hope and up to 5.65 metres in depth on the Mission river gauge. They aren’t extreme numbers but it’s certainly higher than normal.”

Campbell said the flows were in the once-every-five-years range, adding that many local and regional governments use 6m as a threshold where they start to get more active monitoring the levels (and in flood preparation).

Campbell said that the reports from up-country indicate the flows into the lakes are approaching or have reached peak levels and could even recede a bit.

“We are maybe near that for the main stem of the Fraser as well,” he said, “we’re seeing the tributary flows coming down a bit, but with the possibility of a bit of wet weather in the forecast, we’re leaving the high stream flow advisories up. Rain in the interior could lead to a small rise in the Fraser next week, but whether it gets to the same level as last week, is yet to be seen. We’ll get a better handle on things when we see how much rain falls across the basin.”

To stay current with the hazards the freshet presents, please become familiar with the BC River Forecast Centre at bcrfc.env.gov.bc.ca and keep up to date with what could be life-saving information.