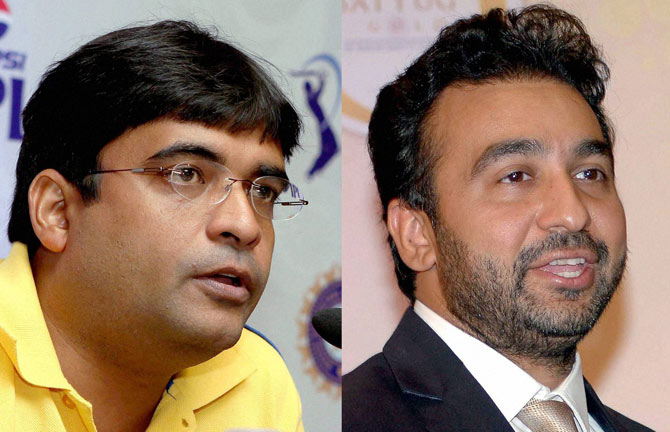 New Delhi, July 14 (IANS) Chennai Super Kings (CSK) and Rajasthan Royals were on Tuesday suspended from the Indian Premier League (IPL) for two years by the Supreme Court-appointed Justice Lodha Committee in the spot fixing and betting scandal that rocked the cash-rich Twenty20 tournament in 2013.
Former CSK team official Gurunath Meiyappan and Royals co-owner Raj Kundra, both of whom were earlier found guilty of betting, were suspended for life from any cricketing activity undertaken by the Board of Control for Cricket in India (BCCI). The guilty duo were also suspended from any cricket related activity for a maximum period of five years.
“His (Meiyappan) habit of regularly placing bets in IPL matches renders the argument of his being first offender and unblemished antecedents in previous IPL tournaments of no worth. That he suffered loss of Rs.60 lakh in bets shows that he engaged himself in heavy bets. It is his bad luck that he did not make money out of these bets,” Justice Lodha said at a press briefing.
“Any agony suffered by him because of media coverage or any hardship that may have been caused to him is too small in comparison to the huge injury he caused to the reputation and image of the game, IPL and BCCI,” Justice Lodha said.
“If the reputation, image and spirit of the sport are lost, what remains? Being 40 years of age, he is not young but middle-aged. It is difficult to accept that he has passion for the game. Any person who has true passion for the game would not be involved in betting.”
Meiyappan is the son-in-law of former BCCI president and current International Cricket Council (ICC) chairman N. Srinivasan. When approached by media channels, Srinivasan said: “Don’t want to speak on this issue, associated with CSK. It has nothing to do with me, why should I step down?”
Kundra is an Indian-origin British businessman who is married to Bollywood actress Shilpa Shetty. Kundra, who owned 11.74 percent of shares in Rajasthan Royals before giving them away in March, was also handed the same sanctions as Meiyappan, which the committee said commence with immediate effect.
In his initial reaction to the committee verdict, Kundra tweeted:” Many inaccuracies. Have requested for a copy of the judgment. Obviously very shocked and disappointed.”
The verdict, read out by former Chief Justice of India Justice R.M. Lodha in the presence of the other committee members, said the cricketers who were part of the two teams were free to join any other outfit.
The Supreme Court on January 22 set up the committee comprising Justice Lodha, Justice Ashok Bhan (retired) and Justice R. Raveendran (retired) to determine the quantum of punishment for Meiyappan, Kundra and their respective franchises. In March, the panel had also issued a show cause notice to Meiyappan and Kundra seeking their response to the committee findings.
In addition, Lodha said the fate of ex-IPL Chief Operating Officer (COO) Sundar Raman, who is also alleged to have been involved in wrongdoing, is yet to be ascertained as the investigation against him is ongoing.
The committee was also requested to examine and make suitable recommendations to the BCCI for reforms in its practices and procedures and amendments in the memorandum of association, rules and regulations. Lodha said this would be done in due course of time.
Following pronouncement of the order, BCCI president Jagmohan Dalmiya said the Indian cricket board will honour the verdict.
“BCCI is committed to honour and respect judicial decisions and it would give its observations after the entire report is read and a collective decision is taken,” said Dalmiya.
He added that the BCCI is committed to ensuring transparency, accountability and cleansing the sport in order to restore the faith and confidence of millions of cricket loving people in cricket in general and IPL in particular.
BCCI secretary Anurag Thakur added: “We respect the verdict and would undertake a collective decision in a transparent manner in the right direction and in the larger interest of the game after the verdict analysed.”
Justice Mukul Mudgal (retired), whose probe panel earlier found Meiyappan and Kundra guilty, hailed the verdict and said it was a strong step.
“It is a strong punishment. It is an appropriate one. It will go a long way in cleansing the game of cricket. Public faith will be restored. It says, however, high a person may be, action will be taken against him,” Mudgal said.
Secretary of the unrecognised Cricket Association of Bihar (CAB) Aditya Verma, who is the petitioner in the IPL spot fixing case, demanded that the BCCI should withdraw Srinivasan’s nomination as its representative in the ICC.
“I am very happy with the verdict of Justice Lodha Committee. Those who have brought disrepute to the game should be done away with by the BCCI. I want BCCI to form a special committee and throw Srinivasan out of the Indian cricket board forever,” Verma said.
“I also request the BCCI to cancel his (Srinivasan’s) BCCI representation in ICC after this verdict. If BCCI does not adhere to my demands, then I will take BCCI to court regarding this matter.”