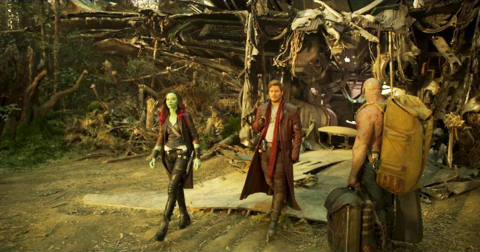 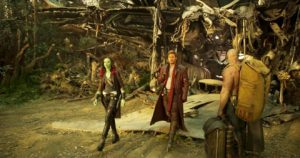 Never was there any doubt. Once in a blue moon a film comes out that is so popular, well made and flat out fun that cinema goers and studio executives clamour for more. Like Dr. mo led to the triumphant James Bond series Guardians of the Galaxy should do the same for science fiction/fantasy fans. Now Walt Disney studios agains unleashes a winning treat with Guardians of the Galaxy Vol. 2. Sometimes the second go round can be equally more fun. Rest assured that the men and women behind the throne at Marvel Studios got the right director and came up with the right storyline to satisfy all. Share the enjoyment at Cineplex theatres around B.C.

Like father like son. Like sister to sister. Family plays a vital role in this rousing soap opera. Full of so many jokes, smart asides and cocky one-liners you can’t help that fall for the wacky antics if this messed up space crew who somehow are charged with saving the Galaxy. Led again by Chris Pine and backstopped by green wondered Zoe Saldana, a beefy tortoise shelled Dave Bautista  and a cute as can be raccoon and pint-sized wonder the team do battle against aliens lusting for blood and an elder statesman with a Napoleon-like complex second to mine.
Sizzling special effects, a nostalgia sound track with pop classics with hidden meanings and veteran acting aces Sylvester Stallone and Kurt Russell hamming it up turn Guardians of the Galaxy into a non-stop roller coaster ride that never loses its momentum or human messaging. And be sure to stay till he end for some snappy scenes of upcoming Marvel adventures.