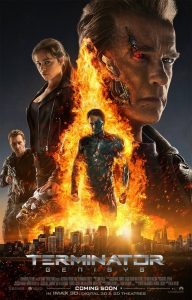 Box office addicts must by now have noted that the summer of 2015 – and dare I say the entire year – looks headed for an all time high for paid admissions. Hot on the heels of the thrilling Mad Max Fury Road and Furious 7 blockbusters comes the equally appealing Terminator Genisys.  Paramount Studios wisely coaxed the leatherwearing infamous bot itself out of semi-retirement and the governorship of California no less to take on his most evil enemies in arguably his most famous role. Yes, Arnold is back – only this time in 3-D – and larger (and better)  than ever.  Catch all the excitement  at Cineplex Odeon Theatres still left standing  in beautiful British Columbia.
Story-wise the  plot is a tad confusing  as the film stats in the future,  Goes back in time, then does a correction of sorts. Originally John Connor leader of the rebellion against those pesky machines dispatches his top lieutenant Kyle Reese to go back in time to locate Sarah Conner In Hopes of altering history and the future. All three ” friends” are well portrayed by Jason Clarke, Jai Courtney and Emilia Clarke. Too bad for them glitch happens which means they have to alter their plans on The fly so to speak.
Again Arnold Schwarzenegger (Commando) gets star billing and a new character known Simply as The Guardian and he gets off the best lines and memorable facial expressions. Certain actors know how to play up and play off of the  quips and no one does it as good as Arnold whose warm presence helps make Terminator Genisys  a whole lot of fun.
Wall to wall action, a smart story, more tremendous stunts and a realistic though somber tone all make Terminator Genisys a whole lot of fun. Why there’s even a scene tacked  onto the closing  credits for the  curious
Terminator Genisys (PG) ****