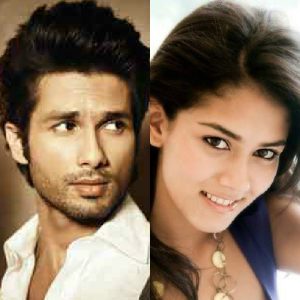 SHAHID KAPOOR, one of the most eligible bachelor in Bollywood and heartthrob of millions around the world, is finally settling down to an arranged marriage on July 7nth at Gurgaon’s Oberoi Hotel and not just Bollywood but the entire nation is excited over the news. Shahid Kapoor, the son of actor PANKAJ KAPOOR & theatre personality NEELIMA AZMI, burst into Bollywood with ISHQ VISHQ and soon the fresh, young & handsome Shahid became the darling of all but it was KAREENA KAPOOR who fell for his suave charms and their ‘famous kiss’ became the talk of nation which was captured by a prying camera. Their love affair was discussed and talked in magazines & other media outlets and it was granted that both are made for each other until one day Kareena walked away to the arms of SAIF ALI KHAN leaving a shattered Shahid. Many unconfirmed theories propped up but Shahid & Kareena kept silent and never talked about it though it’s alleged that Kareena caught Shahid walking out of AMRITA RAO’s trailer, his costar of many films like Ishq Vishq & VIVAH, but Shahid-Kareena chapter was closed forever when Kareena married much older & divorced Saif Ali Khan. Meanwhile, fresh from his linkage to Amrita Rao, Shahid was linked to his KISMAT KONNECTION co-star VIDYA BALAN as both were seen in compromising positions while shooting for Aziz Mirza’s film in Toronto.
The short lived romance fizzled out as the movie bombed after critics thrashed the pairing amidst the rumbling that Vidya looked older than baby faced Shahid and that was the end of Shahid-Vidya chapter. Around the same time, the romantic image of Shahid Kapoor took a makeover as Vishal Bhardwaj signed him for his ambitious KAMINEY with PRIYANKA CHOPRA and not just the critics but the general audience were highly impressed by Shahid’s acting and his pairing with Priyanka. Their mutual respect towards each other soon lead to closeness and both were seen as item and stories were written about their affair, however, Priyanka couldn’t get over her fascination with Shahrukh Khan and soon they parted. Shahid’s next linkage was with SONAKSHI SINHA, his costar of film R….. RAJKUMAR, and both were seen together at various functions but it could also be the creation of the media as nothing much was heard afterwards. Meanwhile Shahid’s association with Vishal Bhardwaj continued with his magnum opus HAIDER and the overwhelming response led to the most awarding time in his career and amidst the applause and trophies at various functions came the news of Shahid’s engagement to Delhiite MIRA RAJPUT, 13 years younger than Shahid but belonging to the same Radha Swami sect that Shahid belongs to. While everyone was talking about the invited guests, it was confirmed that the marriage will be a closed affair with relatives & close friends only and NONE of Shahid’s ex-friends have been invited to the marriage at Gurgaon, however, the reception in Mimbai next day will see the entire Bollywood industry and that’s where Shahid could come face to face with KAREENA . AMRITA, VIDYA, PRIYANKA & SONAKSHI . So watch out for those priceless moments as ASIAN JOURNAL joins others in wishing a successful marriage life to SHAHID-MIRA!
SARDAR JI IS A HUGE HIT!!!

DAJIT DOSANJH’s success moon continued as his latest film SARDAR JI opened to thunderous response all over the world affirming his position as the biggest star of Punjabi films. After tremendous response to his North American tour, Daljit Dosanjh-Neeru Bajwa’s new film was eagerly awaited and inspite of critics thrashing, the film opened well in UK, Australia, New Zealand, Canada & India. As per latest reports, the film is one of the biggest Punjabi hits and confirms his position as the no. 1 star of Punjabi films. GOVINDA has been promoting his daughter TINA AHUJA as her first Hindi film SECOND HAND HUSBAND opens this Friday along with costars GIPPY GREWAL & DHARMENDRA but the film will face stiff resistance from ARSHAD WARSI’s GUDDU RANGEELA and Remo Fernandes’s ABCD 2, which still continues to do well and could become the second Bollywood film to cross Rs. 100 Crores after TANU WEDS MANU RETURNS. ANUPAM KHER-NEENA GUPTA-RAKESH BEDI’s upcoming stage play MERA WOH MATLAB NAHIN THA tickets are now available at KAMAL’S VIDEO PALACE & SHAAZ VIDEO and there’s tremendous response to the play to be staged at Surrey’s BELL CENTRE on Sunday, August 30th. Tickets are also selling fast for NITIN MUKESH REMEMBERS MUKESH as Mukesh Ji’s 40th death anniversary will be remembered at Surrey’s BELL CENTRE on Sunday, August 9nth with Mumbai’s top singers & musicians and KAMAL SHARMA can be contacted at (604)592-9777 for more information. With that, it’s time to say goodbye but not before reminding you all to watch this week’s YAADEIN on Sunday, July 7th at 1 PM on SMC#116 featuring ’20 GREATEST BOLLYWOOD SINGERS OF ALL TIME’!