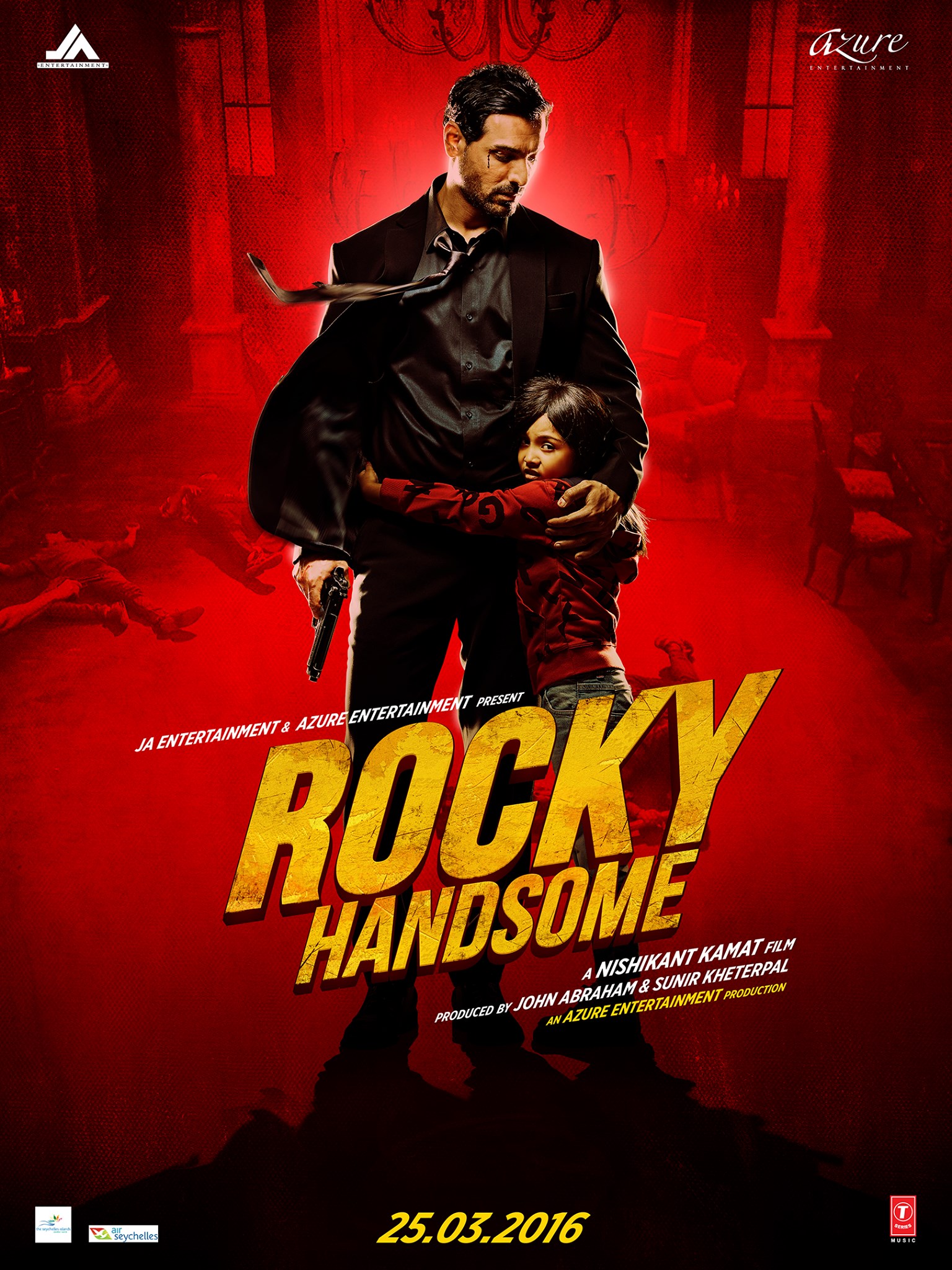 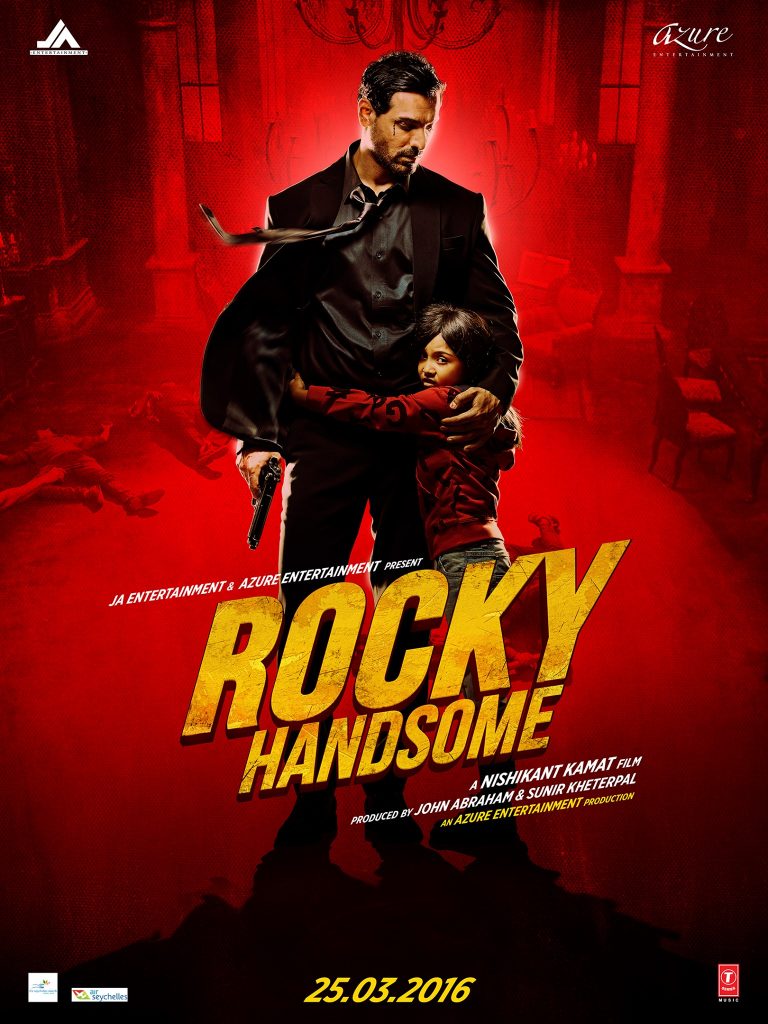 At the height of JAZZY B’s popularity, his album SURMA took the world by storm but few noticed the handsome athletic young model JOHN ABRAHAM, who went on to do music videos for PANKAJ UDHAS, HANSRAJ HANS & BABUL SUPRIYO. After winning GLADRAGS MANHUNT CONTEST in 1999, he finished as runner up at Gladrags International in Manila, Phillipines and soon after joining an acting school, the lady luck smiled as he was signed for Mahesh Bhatt’s JISM ( 2003 ) with BIPASHA BASU and his film journey started. Born to a Malyalee father & Zorastrian mother, John Abraham’s looks became a rage after Pooja Bhatt’s film PAAP ( 2004 ) was released and Yash Chopra’s DHOOM (2004) made him a STAR.
I remember meeting him at Mumbai’s Filmistaan Studio where Karan Johar’s film KAAL was being shot during my India’s 2005 trip and I was simply bowled over by his humbleness and eagerness to mingle and though he hadn’t impressed as an actor till then, it didn’t take long to see a vast improvement in his Sanjay Gupta’s 2006 release of ZINDA. GARAM MASALA, SALAM-E-ISHQ & KAAL kept him in limelight but Deepa Mehta’s WATER (2007) gave him international recognition and Karan Johar’s DOSTANA (2007) confirmed his status amongst the elite. Yash Chopra’s NEW YORK (2008) brought out the actor in him and Sajid Khan’s HOUSEFULL (2009) proved that he can work with others as well. His relationship with Bipasha Basu came to an abrupt end in 2011 but motivated John started his production company and surprised & shocked all with his very first offering of VICKY DONOR (2012). Directed by Shoojit Sirkar and beautifully acted by Ayushmaan Khurana, 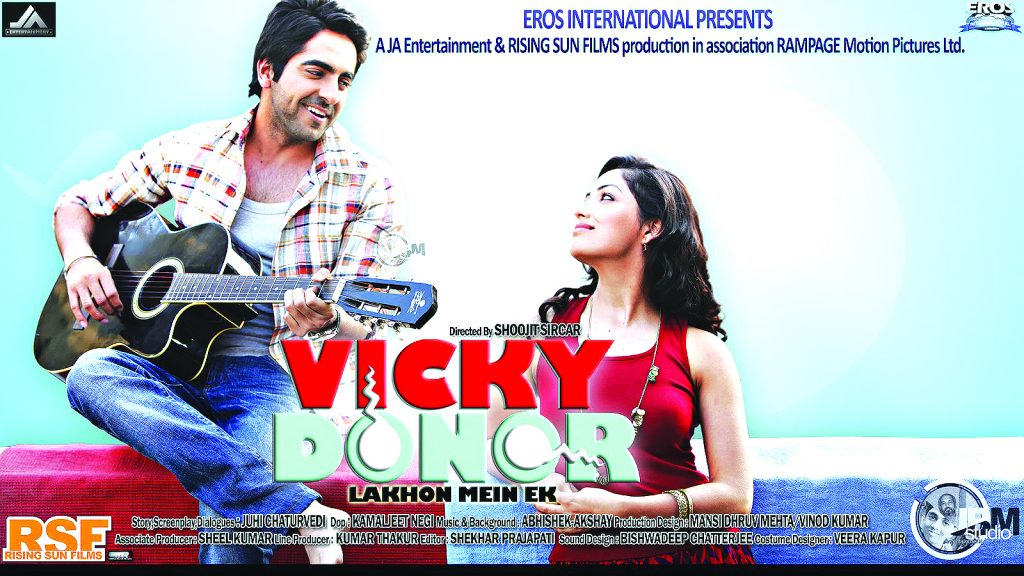 Yami Gautam & Anu Kapoor, the small budget film won the National Best Film for Wholesome Entertainment & the National Best Supporting Actor award for Anu Kapoor. While John Abraham was winning acting laurels for films like SHOOT OUT AT WADALA, his production company made another masterpiece as Shoojit Sirkar’s MADRAS CAFE ( 2014 ) won the critics & public alike and the thriller went on to receive many awards. John’s much improved performance took everyone by surprise as his film FORCE (2014) was one of the hits of the year and he remained a much sought after actor with films like WELCOME BACK in 2015 but now, everyone is eagerly waiting for his next home production of ROCKY HANDSOME (2016). Directed by Nishikant Kamat & a remake of 2010 Korean film THE MAN FROM NO WHERE, ROCKY HANDSOME stars JOHN ABRAHAM, SHRUTI HAASAN, NATALIA KAUR & BABY DIYA CHALWAD in lead roles and with stunt directors flown in from Hollywood, the film is an out and out action film and promises to be a major hit for all John Abraham fans. From modelling to film production, John has certainly come a long way but what impresses even his detractors is the fact that John keeps pushing for better and better in every film and while he has vastly improved as an actor, his desire to make better films with his production company has won him more admirers and this is why his latest announcement of producing SATRA KO SHAADI HAI, a film dedicated to Indian weddings, was greeted with lot of enthusiasm in the film world. That ROCKY HANDSOME will do well is an understatement as his fans are keenly awaiting the release but full marks to JOHN ABRAHAM for dedicated journey from modelling to films and film production and becoming an inspiration to millions around the world! 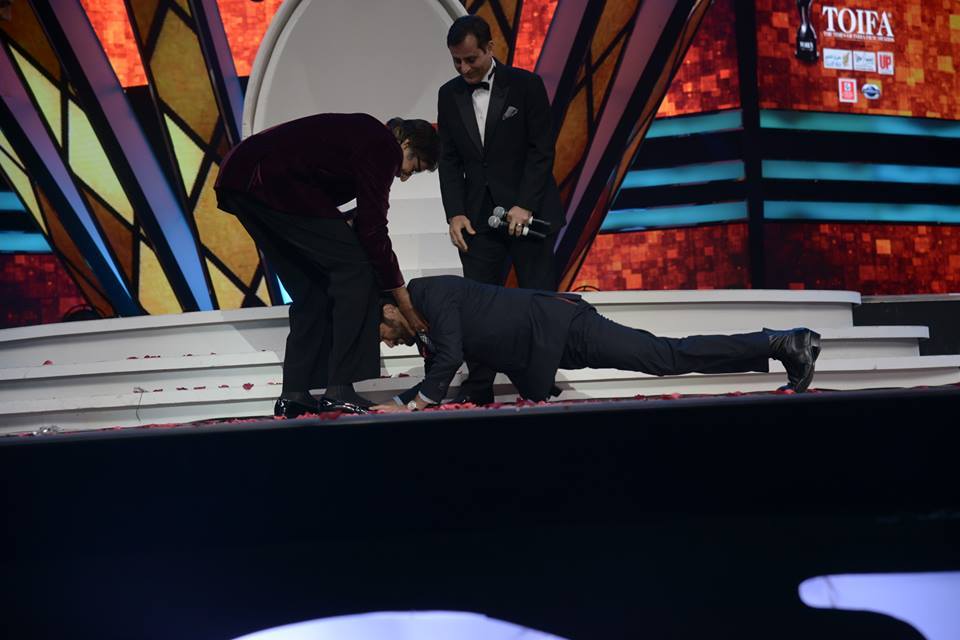 With ‘Mr. India’ ANIL KAPOOR & ‘BAJIRAO’ RANVEER SINGH touching his feet, the ‘SHAHENSHAH’ AMITABH BACHCHAN was honoured with yet another Life Time Achievement award at a glittering ceremony in Dubai to celebrate the best in Bollywood at TOIFA 2016. As expected, Sanjay Leela Bhansali’s BAJIRAO MASTANI & Kabir Khan’s BAJRANGI BHAIJAAN took most of the awards but it was KANGANA RANAUT, who walked away with the best actress trophy for TANU WEDS MANU RETURNS and here’s the complete list of all award winners of TOIFA DUBAI 2016… 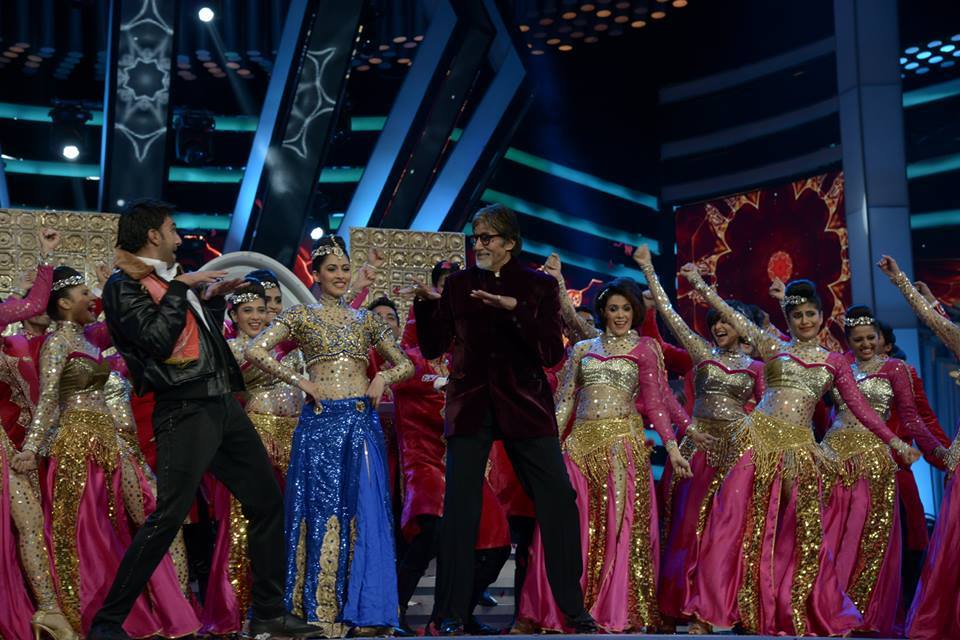 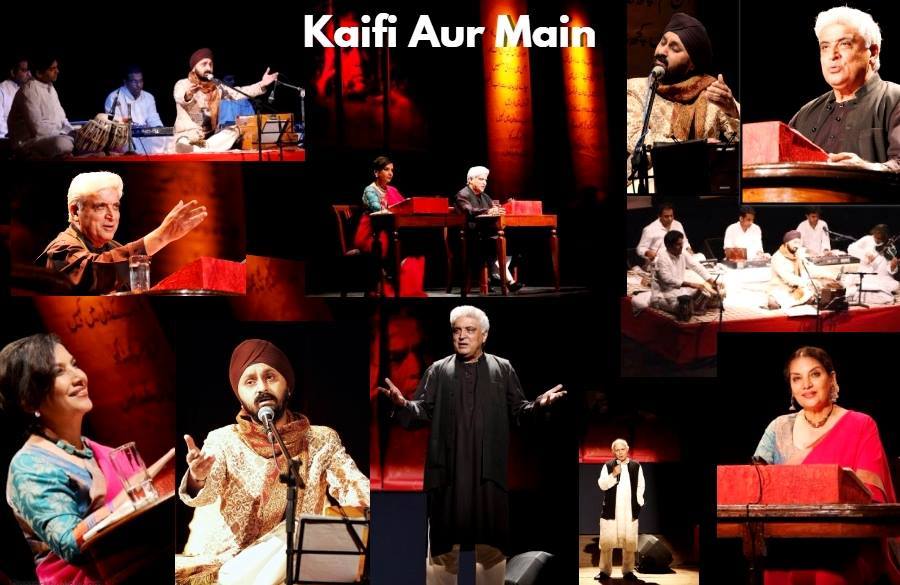 Noted actress & activist SHABANA AZMI & well-known poet, lyricist & writer JAVED AKHTAR, India’s ‘ Living Legends ‘, are coming to Vancouver with acclaimed musical play KAIFI AUR MAIN at Vancouver’s HARD ROCK CASINO on Friday, April 8th for an unforgettable experience of theatre, poetry & music. Accompanied by popular gazal singer JASWINDER SINGH, son of noted music director KULDIP SINGH, Shabana & Javed Akhtar have already performed over 1,000 shows all over the world and they promise a romantic saga that will touch the hearts of all those who enjoy theatre. The entire team of KAIFI AUR MAIN have already performed to SOLD OUT audiences in Milwaukee, Chicago & Detroit and Toronto is also awaiting the legends on Sunday, March 27nth. With Seattle, San Jose and many other North American cities already sold out, it wouldn’t take too long to fill the HARD ROCK CASINO in Coquitlam, which is going to be hosting the first Indian concert ever, so get yours before seeing the SOLD OUT sign at the theatre. Tickets at $50,75,100 & VIP are selling fast at www.ticketmaster.ca and for more information, please contact KAMAL SHARMA at (604)592-9777 or (604)833-1977 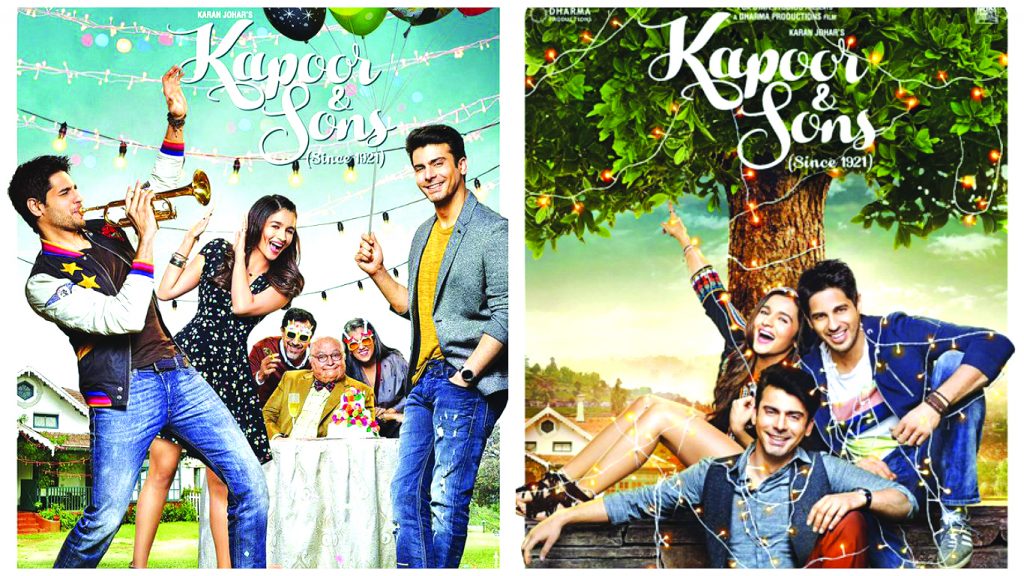 Expectations are always high from Karan Johar’s films and more so when AAMIR KHAN was seen wiping tears after coming out from the special screening of Shakun Batra’s family film but no one thought that it would do so well especially with the whole nation in the grip of ICC T20 WORLD CUP and KAPOOR & SONS belied all expectations as it raced to magnificent Rs.45 Crores collection in the first week. Collections rose from the first day onwards and with strong performances from FAWAD KHAN, ALIA BHATT, SIDDHARTH MALHOTRA, RAJAT KAPOOR, RATNA SHAH & RISHI KAPOOR and strong word of mouth, the film gained strength and it’s being said that it’ll easily overtake NEERJA collections and may end as a strong second in box-office after Akshay Kumar’s AIR LIFT. With HOLI & EASTER holidays, it’s expected to do well in the second week as well

and though Nishikant Kamat’s action film ROCKY HANDSOME with JOHN ABRAHAM, SHRUTI HAASAN & NATALIA KAUR is expected to be the first draw, KAPOOR & SONS may surprise box-office pundits with a mass appeal as the family oriented film! DARA SINGH’s wife and actor VINDU SINGH’s mother SURJIT KAUR passed away in Mumbai and many from the film industry like TABU, SHEEBA & FARAH attended the funeral; all is not well at MALAIKA ARORA KHAN – ARBAAZ KHAN camp as the rumours of their divorce are getting stronger day by day, however, ASIAN JOURNAL will inform you all as it finalizes; there is lull at HRITHIK ROSHAN-KANGANA RANAUT saga as Kangana completed the shoot of Vishal Bhardwaj’s film RANGOON and celebrated her 29nth b’day quietly while Hrithik spend some quality time with his kids in Dubai; there’s no truth to SHASHI KAPOOR’s death rumours as his nephew RISHI KAPOOR and son KUNAL KAPOOR refuted them strongly and yes, Shashi Kapoor just celebrated his 78th b’day on March 18nth; Punjabi films LOVE PUNJAB & ARDAAS continue to perform exceedingly well in North America, UK, Australia & New Zealand but all eyes are on this week’s release of Daljit Dosanjh’s AMBARSARIYA as the success would be the hat trick for Punjabi films this year in North America; Finally a very HAPPY EASTER to all the ASIAN JOURNAL readers as the long awaited tour of KAIFI AUR MAIN with SHABANA AZMI, JAVED AKHTAR & JASWINDER SINGH has already started with SOLD OUT performances in Chicago & Toronto and a reminder to watch India’s greatest musicals on Sunday, March 27nth @ 1 PM on SMC#116 !