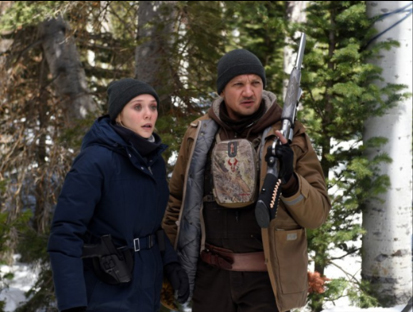 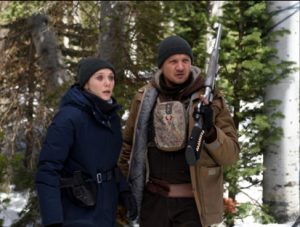 Get set to see a first-rate drama. Based on true events the breakout director of Hell or High Water proves the second time’s a charm with Wind River. Chills will come your way in this VVS Films entry now jarring people’s minds at the Fifth Avenue Cinemas.

Local British Columbians know all too well the plight of missing women. Even the Federal Task force investigating lost Aboriginal Women seems to be coming up short. That’s why to see one chaotic example of this blight on society must be seen.

Determined to get at the truth police and federal forces descent on a remote Aboriginal Village where something bad has happened. When a wildlife trapper discovers a body, it sets off shock waves throughout the closed knit community of Wind River. Mystery surrounds everyone here with Jeremy Renner seemingly out of his league along with the other local law officials. Wounds run deep on this reserve so it’s not surprising that an F.B.I. Agent also, has difficulty connecting the dots. Watch an effective Elizabeth Olsen run into all kinds of obstacles in this first-class suspense thriller that keeps you guessing throughout.

Just the right approach to this delicate subject matter is made through the talented eye and lens of director Tim Sheridan who creates a chilling atmosphere populated by troubled unsettling characters.